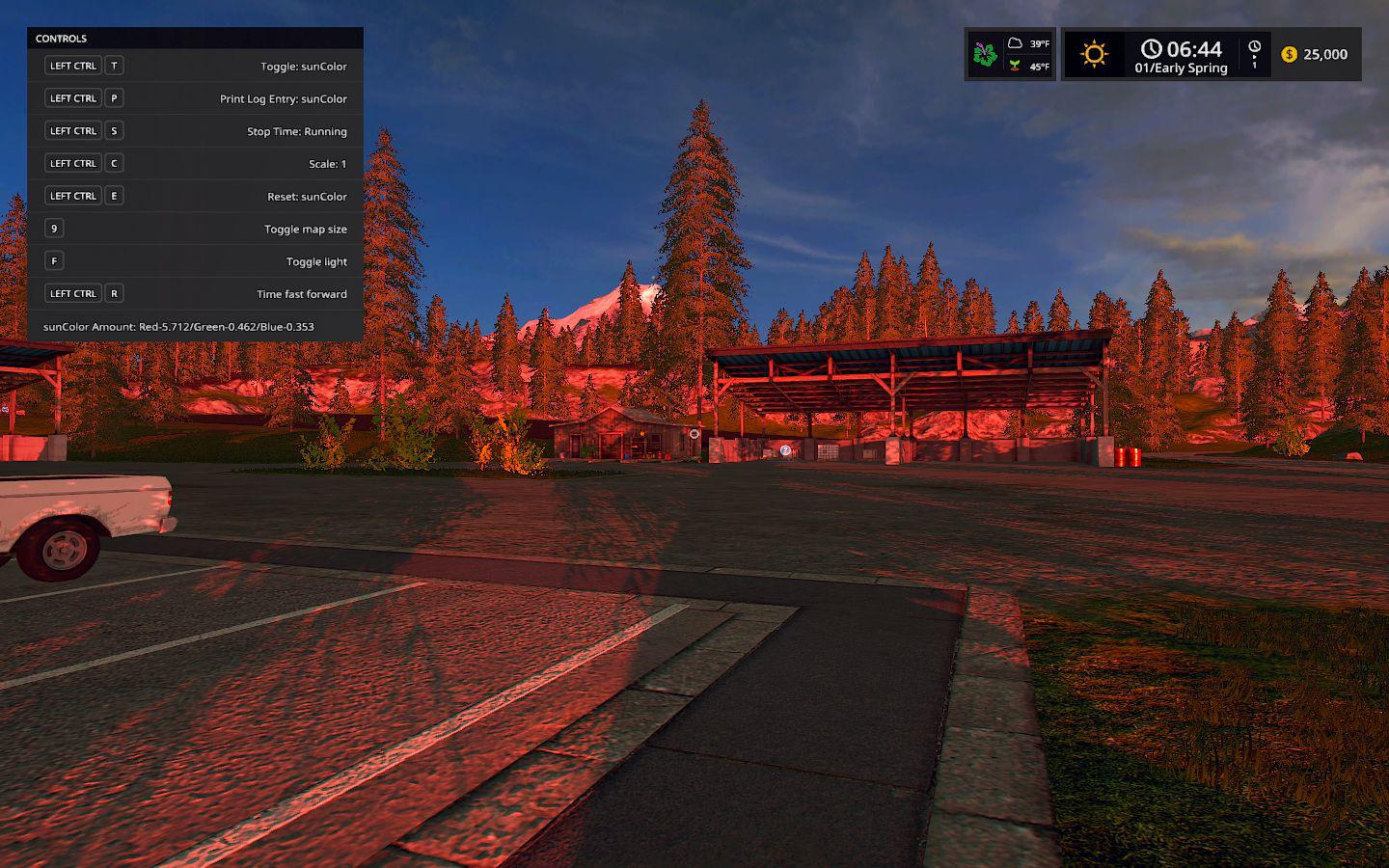 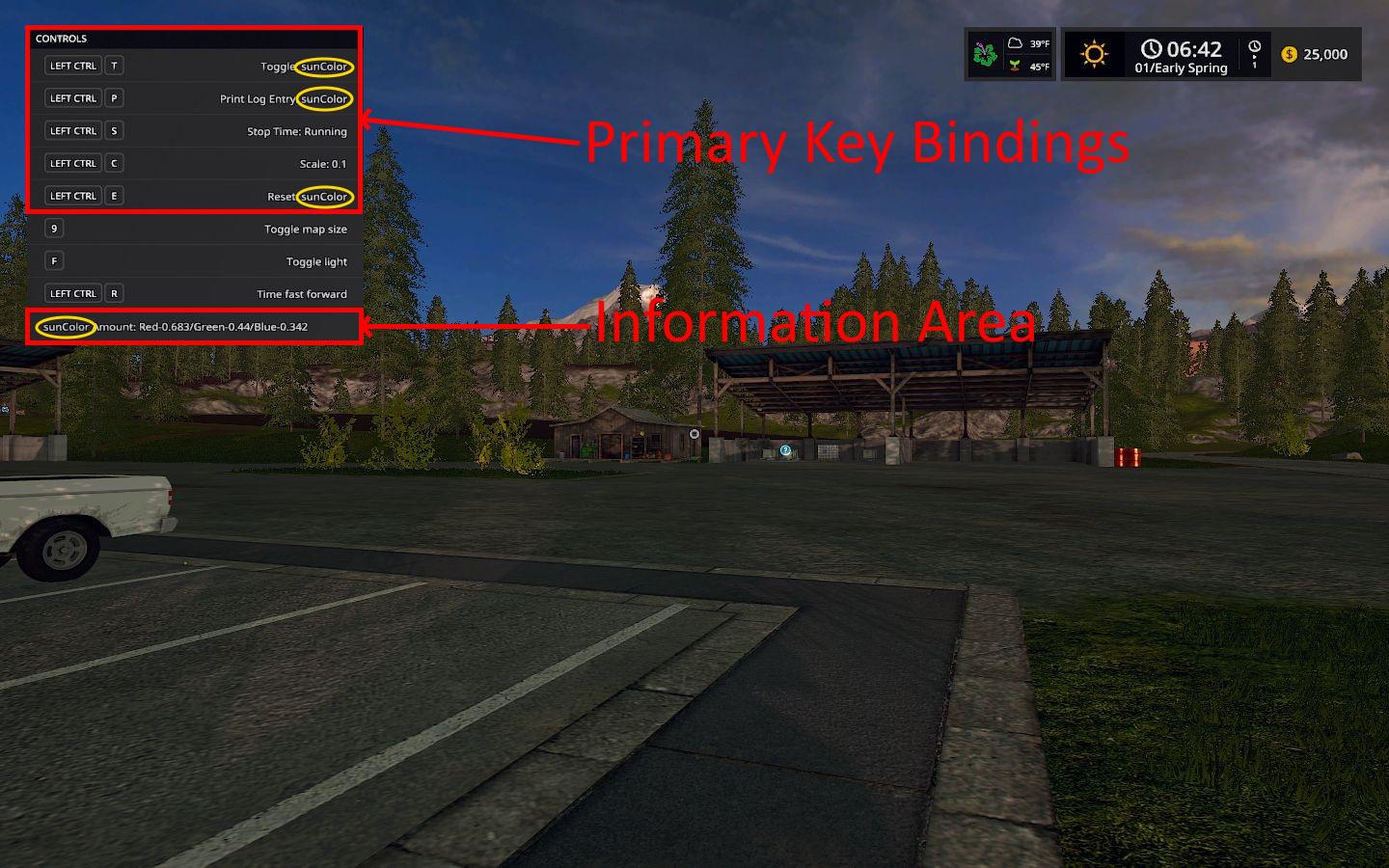 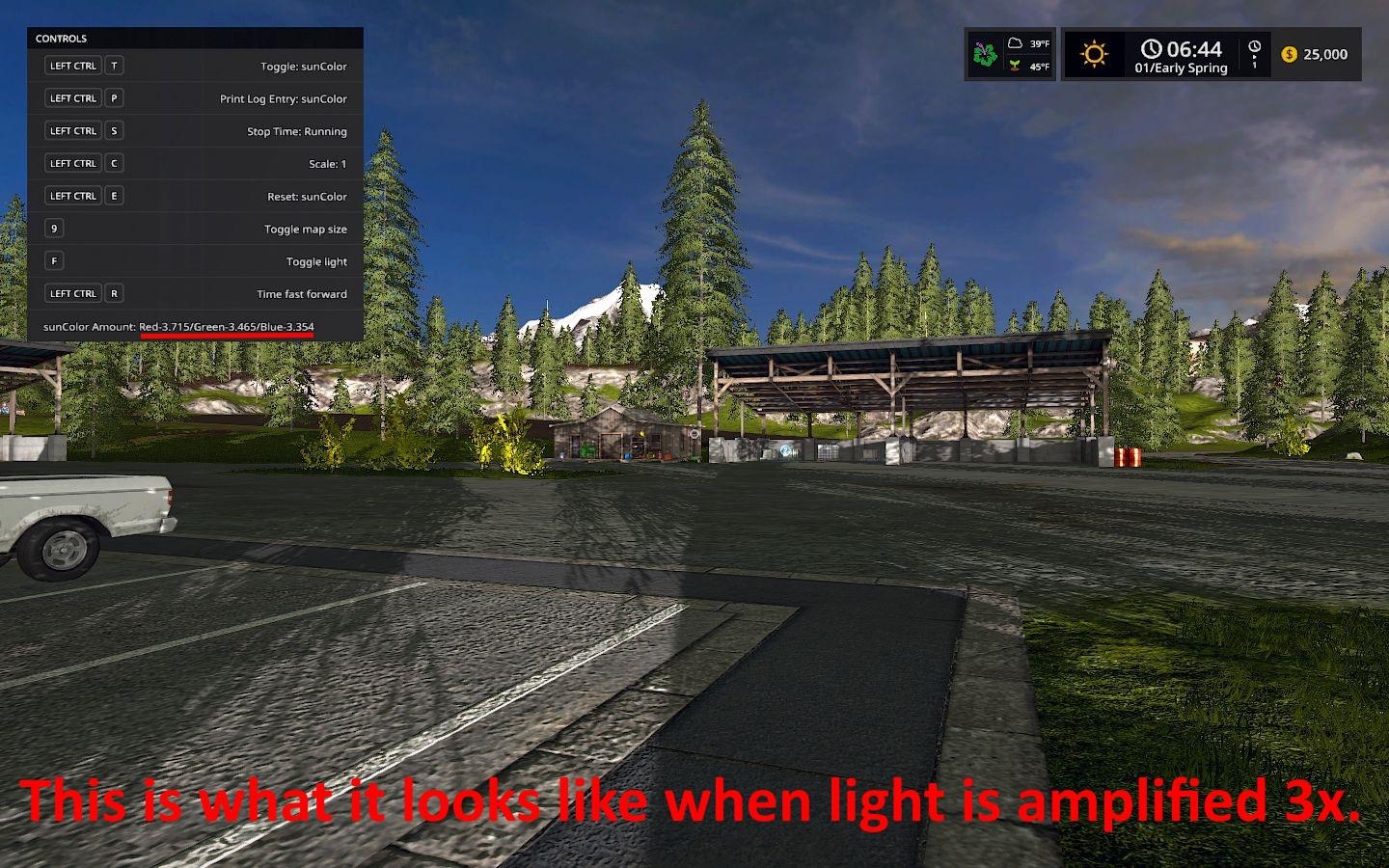 This is NOT a ‘mod’ in the traditional sense. It is rather intended to be a ‘tool’ for those creating maps. That said, it does need to be in the mods folder in order to be used.

Each map comes with settings that impact the gameplay environment. The ‘environment’ referred to here is with respect to things like light, sun colour, fog, and so forth. These settings are stored in each map in a file that has the name map01_environment.xml, or something similar. If the mapper wishes to alter map environment values, he must do so by altering the map’s environment xml file. Testing changes to the environment can be tedious, requiring changes to the xml file and reloading of the game, or reloading of the environment. With this mod tool, a mapper can now make dynamic changes in-game to the map’s environment, and see live how the changes impact what is seen by the player.

This tool does not alter ALL items in the map’s environment file, but most of them, specifically, ambientColor, sunColor, volumeFog, distanceFog, and dustDensity. The Seasons mod alters substantially all of the settings in the map’s environment xml file, including these. If a map is to be made seasons-ready with respect to the map environment, the mapper will need to create a season xml file for the map.

A Brief Example:
Suppose that a mapper wishes to make changes to the sun light, by making things brighter in-game. He would do so with the following steps:

1. The game is loaded up with the FS17_MapColour mod in the game’s mod folder.
2. Next he presses input binding LEFT-CONTROL-T until he sees in the F1 help menu that the toggle is set to sunColor. At the bottom of the F1 help menu, he will notice three colour settings impacting sunColor. The colour is made up of Red, Green, and Blue factors. On the default GoldCrest map, when a new game is started, these will show as sunColor Amount: Red-0.969/Green-0.719/Blue-0.518. He also notices that the time is 6:40.
3. The mapper decides that 6:40 is the exact time he wishes to make some adjustments. To focus on this particular time, he stops time from running by hitting the input binding LEFT-CONTROL-S. This will leave the time permanently at 6:40 am until he sets the time running again using the same toggle.
4. Now suppose the mapper wishes to make the environment brighter, but leave the sun colour alone. He next checks the scale of the change he?d like to make. According to the F1 help menu, the second item from the top shows a scale of 0.1. Pressing the input binding LEFT-CONTROL-C a few times, he toggles the scale until it says Scale: 1.
5. With that scale now set, the mapper uses the key pad input bindings to make the changes to the sun colour. He presses KEYPAD-4 once and notices at the bottom of the F1 help menu that Red is now set to 1.969, up from its previous value of 0.969. He will also notice a colour difference in what he sees in-game. The light will have a redder hue to it. He next presses KEYPAD-5 and KEYPAD-6 in turn, which increases the green and blue colours by 1. If the mapper accidentally increases any of the colours by more than desired, he can decrease the colours using KEYPAD-1 for red, KEYPAD-2 for green, and KEYPAD-3 for blue. The amounts will increase/decrease in the amount of the scale.
6. If at any time the mapper is dissatisfied with how the colours look, and wishes to just start over, he can press the input binding LEFT-CONTROL-E, and it will reset the colours to their default map settings for this particular time.
7. If the mapper is satisfied with his updates to the colours at the time of 6:40, and wishes to remember them for later, he can print his changes to the log for later reference by pressing the input binding LEFT-CONTROL-P. The log entry will mimic how the information is to be entered to the map?s environment xml file.
8. After examining sun colours, the mapper may next wish to adjust other settings, in which case he can toggle to them using the input binding LEFT-CONTROL-T.
9. Later on, when the mapper is done recording his changes, he can consult the log entries made, and use them to make updates to the map’s environment xml file.

The above change, if implemented in the map, will impact the map’s light environment just prior to the time of 6:40am, and the time just following. These environment changes happen on a ‘curve’ (ie, they change gradually with the passage of time between a setting at one particular time, to the new setting at a later time… and then gradually to a new setting at a still later time), so if the mapper wishes different colour settings at other times of day, he will need to go through the above exercise at whatever times of day he wishes alterations to be made. The current settings impacting the map in its environment xml file should be studied in conjunction with changes made in-game for best effect, so as to know how to best use this tool.

Additional instructions, explanation (such as definitions for the meanings of ‘ambient’ versus ‘sun’ light, etc.), and other details are contained the mod’s Instructions.xml file.

NOTE: It is extremely helpful if a mapper first has a working knowledge of the map environment file settings before using this tool. For anyone attempting to use this silly tool, it is strongly encouraged that they first read the instructions.xml file inside the mod. My apologies in advance for the length of the instructions included here, and in the xml file contained inside the mod, but if one doesn’t understand these settings, then this tool is of little use.