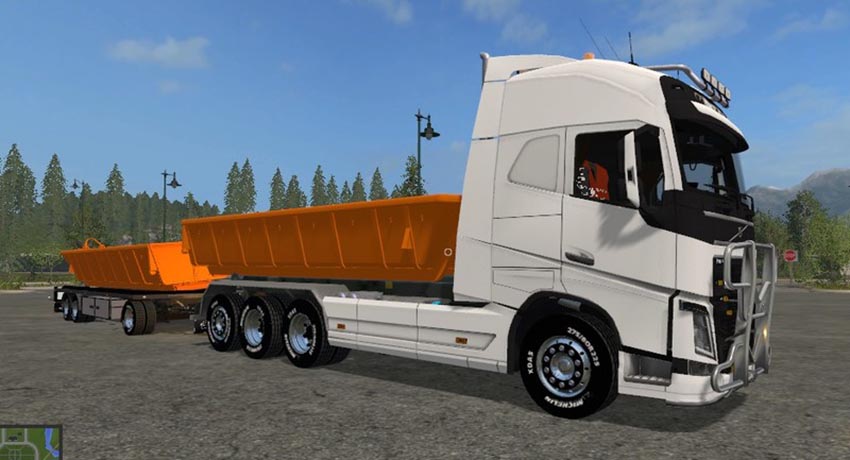 sat down now over weeks weeks with the HKL history apart.

Have several trucks built and 2 HKL trucks have become perfect.

the one I’m in the final version not upload, there was beschweden and I’ve used other textures (mimimimimiii)

it but I introduce you to the truck, which I have built for me in LS17.

yeah right, I have the truck FOR ME built and had not planned to upload.

but because I see what is at HKL trucks in circulation there, I want my love to make available to others!

this will be the second and last truck I upload.

because as I have always said, I am not a modder, I just did not feel like the tinkering of HKL trucks someone else left to because hardly an idea has the HKL truck and how it behaves in the real quality.

so that the foreword.

Have the interior as fancy designed as only just goes, light / blinker and so on.

I have the handling several hours tested, he drives like a beefy volvo.

the trailer is somewhat easy, but that’s normal, because they weigh not much, so you should also go schomn realistically, so it also the acting accordingly.

added nor the truck now in the tilt speed increases, including one extra script needed in ls15.

strobes and installed daytime running light addon, you have to drag you so, so that the lights and so work as they should.

the hook can extend so that you can then load the container on the trailer. with key Y

the trailer has installed colli sions, that seemed invisible, which for the care of the container in the correct position is.

with some dummelei lands the container always there where it belongs, if it is not even directly everything works

light addon can be found in modhub, so the mod menu from ls17

(Deficiencies: you can to not stain truck on cab, the dirt textures spinning around like the color palette and can be the contqainer not fill the silo from when he stands on the trailer one would have new container building with a second attacher to the bottom. the rails, the attacher says the motorcar that you have a container still there. just running the story übern object attacher of works great.

I take the truck only hollows, cereal container and liquid manure container. everything else I find optically not suitable for the trailer.

the kotte universal pack, you can not use, unfortunately, since the container always cuts off. should therefore be ensured that the work truck with the trailer, you have the container of itrunner packs choose.

Oh, and I have no authors added, because me frankly NEN damp interested and I am not attached to the large bell here with my modderei because now I’m just gamer yet again!