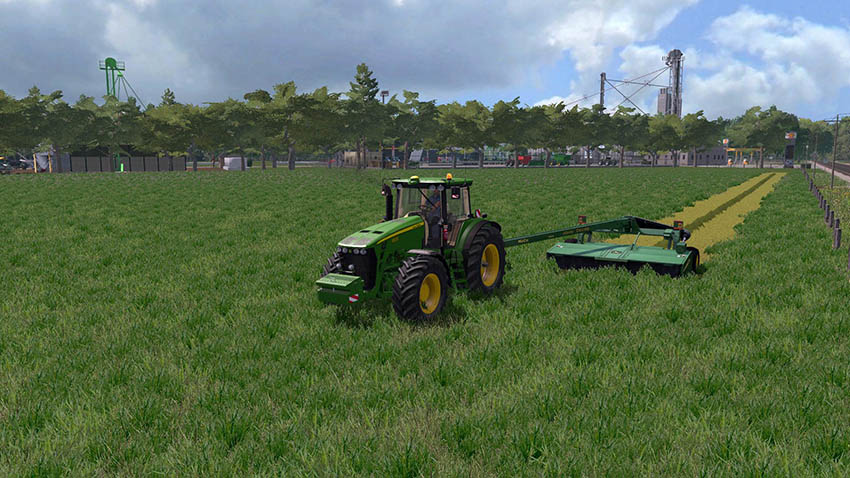 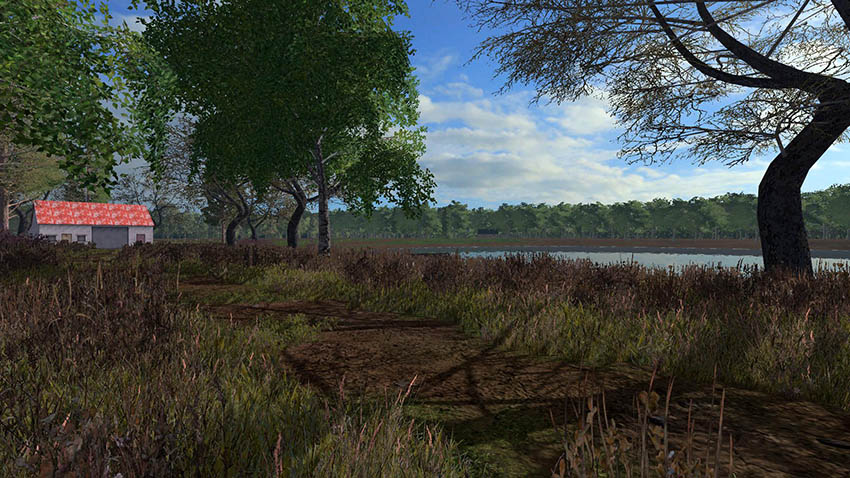 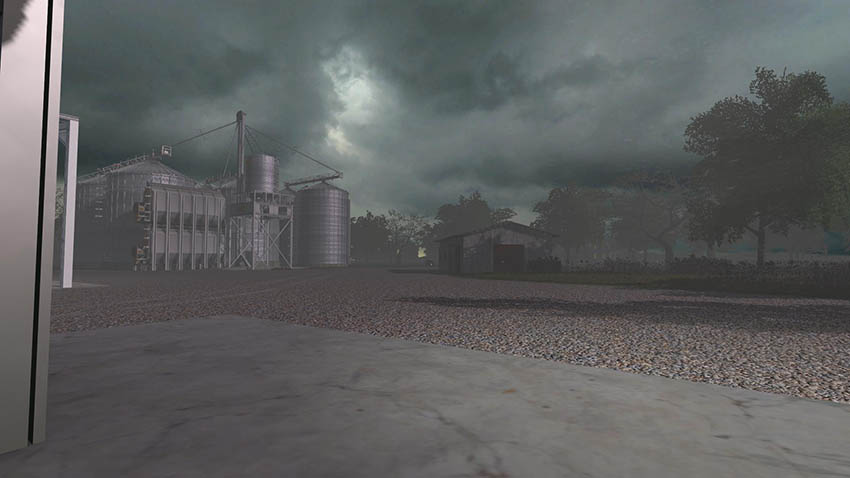 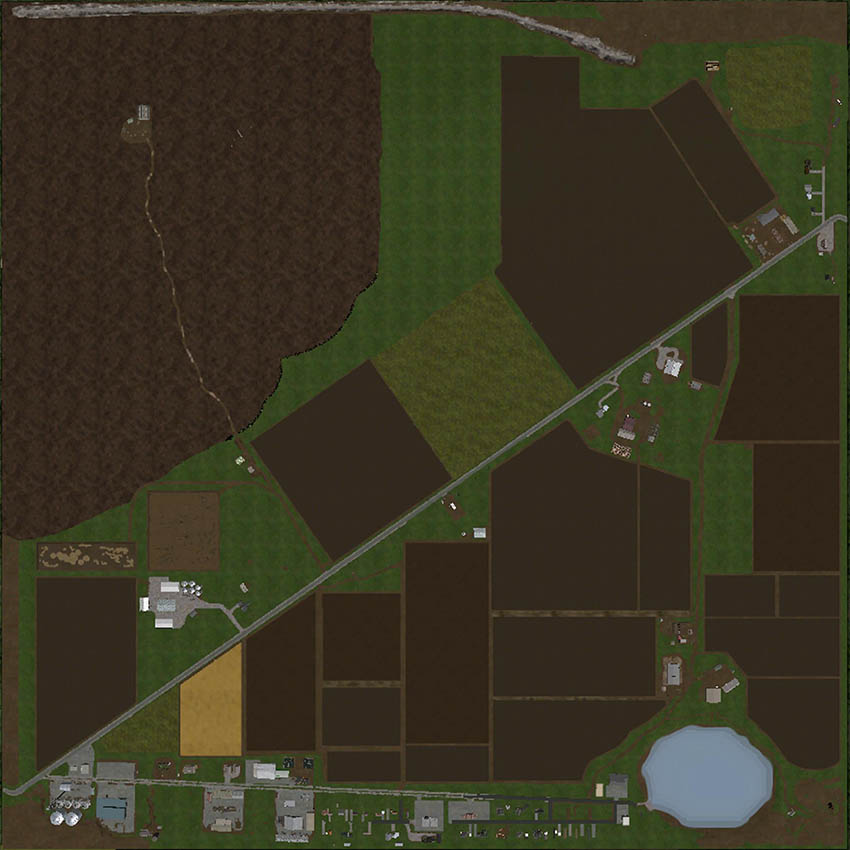 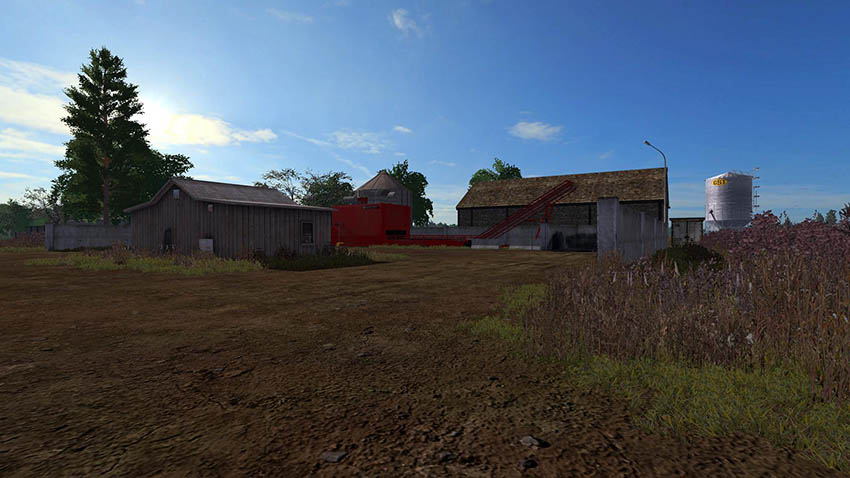 The popular Emerald Coast USA for 2015, a joint project with my son, is back, better than ever, with new and interesting features.

Deep in the southeastern United States lies the Emerald Coast. Just a few miles
north, however, there is rich farmland. Now you can journey to this area and
enjoy the farming experience for yourself. You begin with adequate equipment,
but to work well you must become profitable and expand.

In this region forestry is just as big a business as arable farming. Therefore,
a large managed forest dominates the northwestern hills of this map. Arable
farmland can be found in between the forest and the town, which is located in
the southern part of the map. All standard animals are available, with a sell
point in town.

All of your farming supplies, such as fertilizer and seeds, must be bought in
town. (no seed or fertilizer triggers at the farms) Fuel storage is available
on the farms, with a small amount to get you started, for more, use the bowser
to refill from town. For those that prefer to fertilize using anhydrous ammonia
there is a dedicated sell point by the main highway.

There is plenty of work here, so enjoy farming in the Emerald Coast USA!

This map has all the default crops, including a large forest of pines for some
serious forestry, and the map supports sugarcane

There are four sellpoints to sell stuff:

There is a modern grain system on the farm to store your produce until a better
price comes along. 4 additional separate silo bins at various locations on the
far end of the map hold a specific crop and require an auger such as the large
Farm King to fill.

There are no unrealistic places to store grass or straw… as IRL you would bale
it up and store it, there are sheds around the map where bales could be stored,
in addition to 2 custom auto storage bale barns which store hay bales only.

– fermenting silos at the farm do not need compacting / will empty directly into
feed mixer / check status at console next to silo. (2 silos, accepts chaff,
grass and dry grass)

– Milk sale is stopped on this map… there is a fill trigger at the livestock
farm milk tank, sell at the dairy behind the general store.

– There is custom traffic on this map, edited for faster speed without tinkering
with the game itself and messing up other maps… definitely do not pull out in
front of them! Also, several vehicles are parked at various locations (during
the work day) and leave at night.

– The fields all must be purchased except 5 which you start out with…
Since the farmland in this area has been unused for a few years, some of the
fields are in various states of disrepair… One field in particular has drainage
issues, however, IT is priced to match the condition of the field…

– The dealer lot and lobby, the granary sellpoint, the fertilizer sellpoint and
the garden center, the sawmill, the dairy and the rootcrop sellpoint all have
timed gates which open at either 7:00 AM or 8:00AM and close at 6:00 PM… no
entry is permitted into these areas before or after hours…

– The map is fully Seasons Mod ready… with a custom “snowmask” and all the
foliage layers change according to the seasons… Also, a custom GEO is built in
to this map to simulate realistic weather and growing conditions in this area…
NO other GEO is needed [NOTE: It is intentional that some trees do NOT change
colors or die with the seasons… this simulates real trees in this area]

– This map incorporates the all new “dynamic mud” (based on the original mud mod
and modified by permission from the original author by reallogger) Without the
Seasons Mod active, the mud will be “on” or “off” according to whether on not it
is raining… With Seasons Mod active, the mud “comes alive” gradually getting
muddier according to ground wetness… a few dry days in a row will “dry out”
the muddier areas…

– This map also incorporates the all new “grazing mod” by reallogger… this mod
“scans” the grass in the pasture area to fill the grass troughs automatically…
With Seasons, this mod really comes alive, as there is no grass in winter and in
early spring, so you need to supplement the animals grass with hay bales… Also
care is needed when placing a large number of animals into the pasture, as the
grass available in the pasture may not support them if too many animals are in
the pasture, just as in real life. Mowing of the pasture grass is disabled to
better allow the grazing mod to function as it should.

– This map also incorporates the clip distance FPS mod by Ian898 of Frontier Design
clip triggers are placed in the machine storage buildings around the map to help
reduce fps issues from having all your favorite, high detail mods parked in them…

– This map has chopped straw built in, no need for any additional mods…

NOTE: The starting vehicles xml includes the mod Sakundiak auger, needed for the
unloading of the Brock wheat bin… and also includes the Shell fuel trailer from
the Kotte Universal Pack V 1.0.0.6 (by Farmer_Andy) for the fueling of the compost
master… these mods MUST be in the mod folder and activated at FIRST game start
and save, other wise you would need to buy them at a later time.
The FS17_kotteUniversalPack.zip can be found on marhu.net… the FS17_FarmKing.zip
and the FS17_Sakundiak.zip augers can be found at americaneaglesmodding.com

Disclaimer: this is a highly detailed map, using many different scenery objects
and several custom foliage layers to achieve visual realism, and as such will
require a strong, high spec PC to run… especially if you have many mods on the
farm. The only solution to this issue is to not use any mods and/or turn the
settings down. Additionally, to avoid unforeseen issues and conflicts, please have
ONLY this map in the mod folder as having multiple maps in the folder will cause
issues as the game loads all the scripts from all the maps, including the active
one…

This will be the only version of the map, unless someone finds a game breaking
bug, shouldn’t since it’s been fully tested. However, any things you don’t like or
would like to be improved will have to be for your own private editions.